Selling the van: why Colt 45 are your new favourite band

So tonight I went to Duffy’s Bar in Leicester to see Colt 45 on the last night of their UK tour. Yesterday they played Brighton. Tonight they were towelling off and driving home to Cumbria. If you are from outside the UK (or from London), that’s a five-hour drive at this time of night. And ten during daylight.

I was prejudiced to like them, because their drummer is the half-brother of my drinking buddy Jon’s best-man’s wife, Carrie. I know: practically family.
Also, she had posted this video of them covering Spandau Ballet’s classic, Gold. You can check that out here  Colt 45 – Gold   and if you like that you can follow the rabbit hole of YouTube through their other stuff.

It’s a “school night”, which only seems to matter in The Shires: when I’m in London no-one ever suggests that Monday to Thursday you need to hurry home after work or else you’ll wither.

Carrie (and her husband Cam) had never seen Adam’s band live. For people who didn’t grow up together, you’d be forgiven for thinking that C&A were as thick as siblings could be, especially when they Facetimed family from the pub. It was lovely to sit with them before the show and to hear his tales of touring professionally.

They’d sold the touring bus with bunk beds the year before, to finance another year of touring and recording. Van hire was expensive so they’d only named one driver and that was Adam. I suspect that in the annals of rock, the drummer would be voted “least sensible designated driver” in at least 9 out of every 10 bands, ever.

They were on tour with Straight Lines: a four piece from Bridgend who were mostly related to each other and somehow descended from the one out of Motörhead who wasn’t Lemmy or Phil “Philthy Animal”Taylor. They looked like The Kings of Leon. But from near the McArthurGlen at junction 36 of the M4, instead of Alabama (or wherever KoL are from: I’ve used all my Wikipedia credits on Motörhead members).

The tour had apparently been remarkable for having included accommodation and food at each town. It was fair to say that Leicester, and this bar, were anticlimactic after the delights of a Bank Holiday weekend in Brighton. Adam seemed genuinely delighted to see his family and talked enthusiastically of his fiancé and two-year-old that he would see once the gig was done.

So: they played. And it was joyful.

Three guys, very clearly fond of each other, musically as tight as I guess good musicians at the end of a tour can be. The power punk they play definitely isn’t my thing but unlike loads of try-hard bands I’ve seen, they had pop tunes and three voices that were properly Beach-Boys harmonic. (I was never cut out for rock journalism, obviously). The biggest thing for me was that their set flew by. This is them. 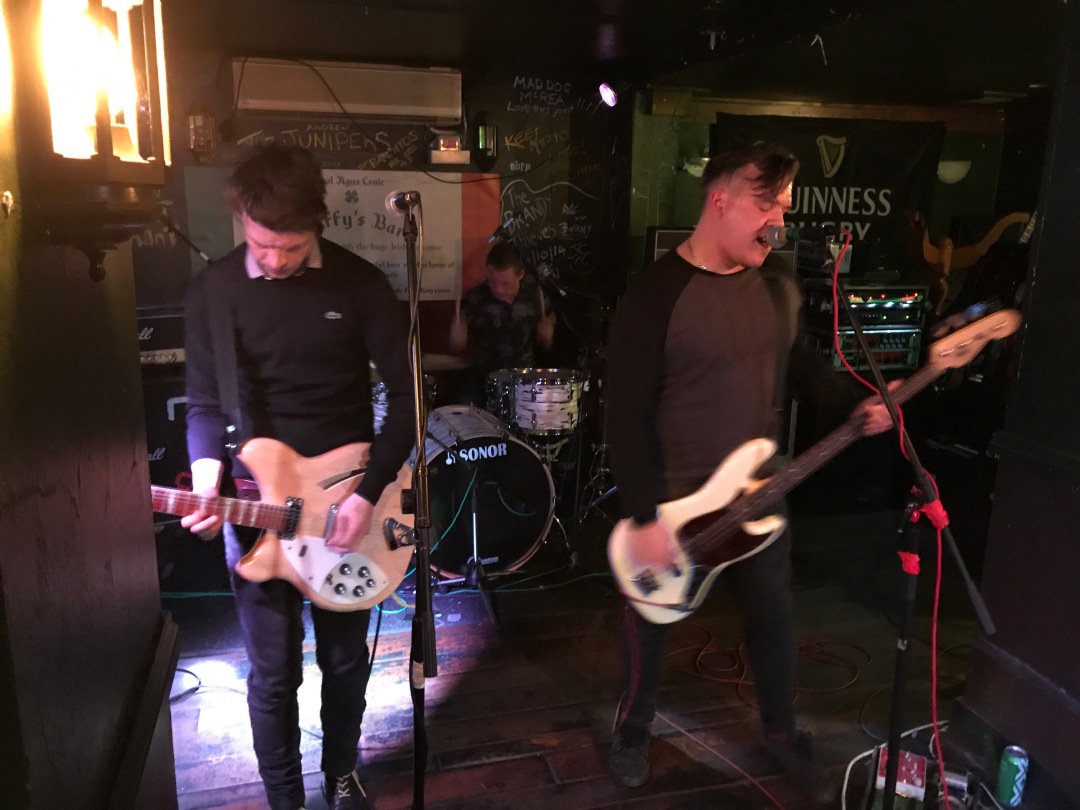 Straight Lines were good and got better later in their set, when they started to sound a lot like non-singles Slade. They looked like (and subsequently declared that) they could do with a rinse: a road trip really is no excuse for crusty denim.  I get that rock stars can look a bit unwashed, but I suspect that Michael Hutchence (by whom all rock stars should be judged) smelled wonderful most of the time.

And for most of their set, and all of their final number, the three members of Colt 45 stood at the back and sang the words to their touring companions’ songs.

This is them, singing along 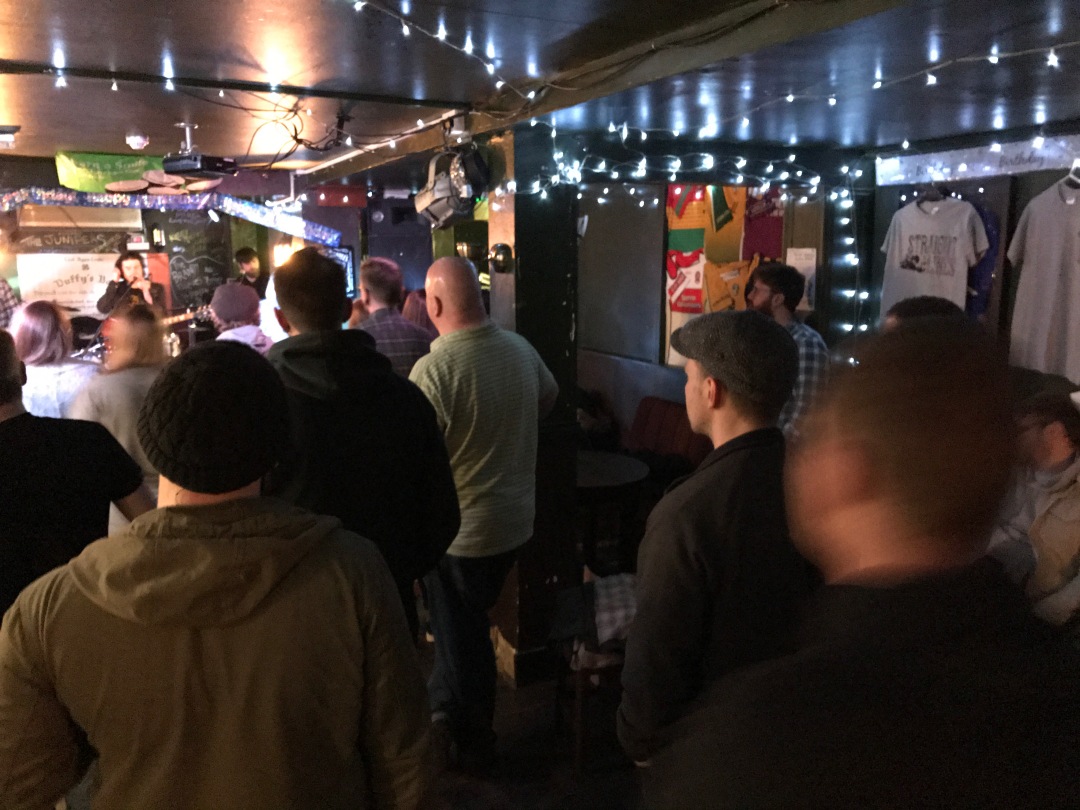 Here’s Carrie with the band (Adam’s on the left). 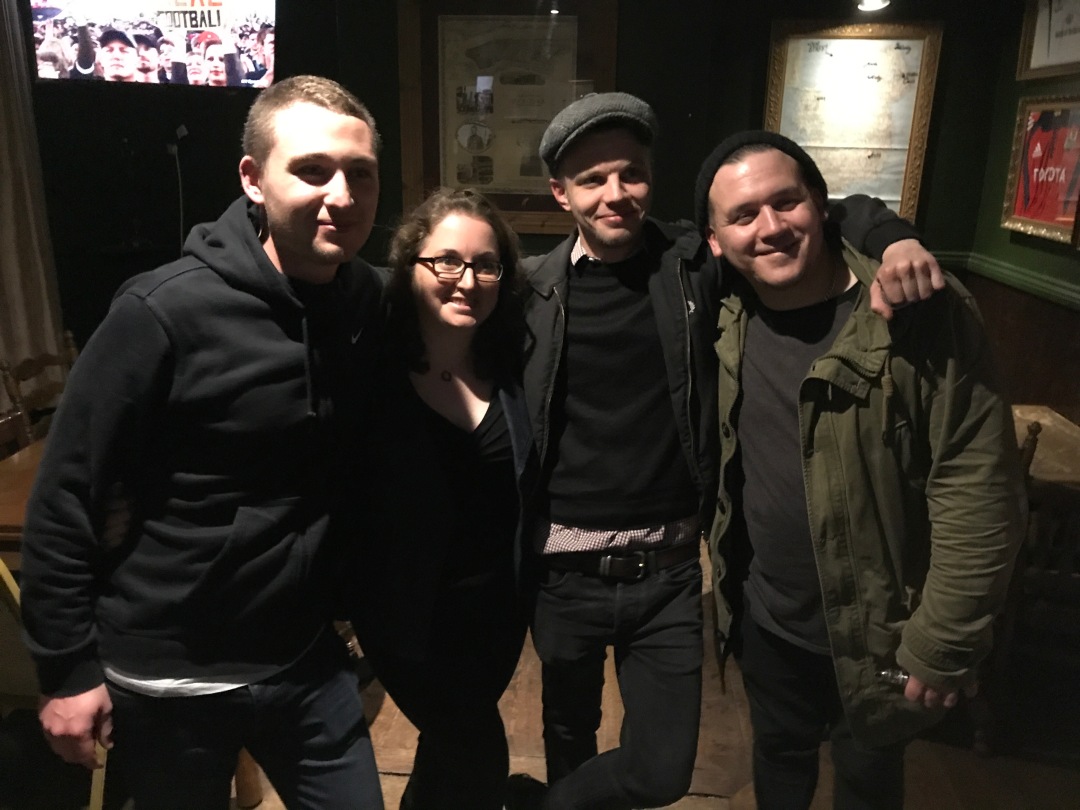 Now, I don’t know the economics of this level of music business (and it’s nothing I’ll ever experience) but this looked like a proper gang having the best time ever, and tell me that’s not something that you’d love to have a bit of, once in a while.

Music has probably never been a meritocracy: look at my prejudices towards the giddy pop band and away from the plaid-and-bearded-heartfelt-ah-now-I’ve-not-worked-this-out-properly-insert-your-own-collective-noun. There will have been people there tonight for whom Straight Lines were their new best thing. Their frontman only half joked that their latest song was posted on YouTube yesterday and that was the extent of the promotion it would get and hence the income they could expect from it.

If there were justice in music, and if my wishes counted for anything, then Colt 45 would be massive. And you’d own an album by The Kevin McDermott Orchestra.  David Ford would be a billionaire as well as Poet Laureate. And your personal favourite band would be playing Wembley this summer.

A lot of my friends went to the Handmade Festival, also in Leicester, this weekend. There will have been plenty of bands as good and some empty and talentless ones, too. It’s not at all obvious how some will break through and some won’t.

Someone watching each one will have had the same thought: it’s Billy Joel’s “man, what are you doing here?”

The effort just to get music out must be overwhelming for some people. Tonight it was a treat to be standing just a little bit closer to a proper musician trying to reach an audience and never letting on that this might not have been the pinnacle of the journey so far.

My band, NotNowCato, plays a pub 520m from my home, Friday August 4th, if you’re interested. We do other people’s songs.
Postscript: you might like this article from the Guardian last year that describes the economics of modern bands. http://www.theguardian.com/business/2016/jan/30/rocknroll-stardom-live-music-struggling-bands-slow-club-brawlers